“Fluorinated greenhouse gases” (also known as F-gases) are man-made chemicals defined as molecules containing fluorine and are used in industrial and also commercial settings. They were first introduced to replace ozone-depleting substances as they did not affect the ozone layer but was later found they induce a significant greenhouse effect.

The greenhouse effect is determined by their global warming potential (GWP) which is the potential of a greenhouse gas relative to that of carbon dioxide (CO2).

Aim of the Regulations

The aim of the relevant regulations is to safeguard the environment by reducing the emissions of fluorinated greenhouse gases through the imposition of rules and conditions on the marketing of F-gases.

What is the F-gas Regulation?

The F-gas regulation objective is to reduce the amount of F-gases measured in tonne(s) of CO2 equivalent placed on the market by producers and importers through quota allocations. The reduction started in 2015, and the amount of F-gases is further diminished on a regular basis until 2030. The ban of fluorinated greenhouse gases with a large GWP will also take place at established dates in this timeframe.

The regulation also establishes the requirement of certification programmes for personnel involved in the handling of F-gases. Thus, processes relating to F-gases are made more efficient to limit the unnecessary emissions of F-gases.

What is an F-gas?

Thus, any substance or mixture that contain fluorine and exerts a greenhouse effect are considered as F-gases. The list of F-gases currently placed on the market is found in Annex I of the F-gas regulation in force found in this link.

As an Undertaking of F-gases and Pre-charged Products, what are my Obligations under the F-gas regulation?

According to the Regulation, an undertaking is someone who is either a producer, importer, exporter, places on the market or operators involved with installation and up keeping of pre-charged products or responsible for the F-gas after its life cycle such as recycling (See Article 2(30) for the official definition).

As a producer of F-gases, your obligations include taking measurements to reduce and limit as much as possible the emissions of F-gases during production, transport and storage. This obligation also applies to producers which produce F-gases as by-products. Producers should take notice of restrictions on the placing on the market already in place of certain F-gases and any upcoming restriction with respect to Annex III. These obligations must be respected in accordance with Articles 7 and 11.

Producers are required to register to an electronic registry for quotas for placing of F-gases on the market known as the HFC registry. This registration is mandatory for producers to be allocated a quota in accordance to Article 16.

It is also important for producers to make sure that quantity of F-gases placed on the market shall not exceed their allotted quota allocated by the Commission in accordance to Article 15.

As a producer of pre-charged equipment, the obligations to register to the HFC registry and assurance that the quota is not exceeded also applies. Failure to comply with these obligations, placing of pre-charged products on the market will be prohibited with respect to article 14. A declaration of conformity is required.

The pre-charged product must be properly labelled, stating that the product contains F-gases, the industrial or chemical name of the F-gas and the quantity of F-gas expressed in CO2 equivalent.

In addition, precautions shall be taken to reduce leakage of F-gases from products by making necessary checks and also installing leakage detection systems. Leak checks are required to be documented and recorded. The records shall contain the relevant information stated in Article 6(1) and are to be kept for at least 5 years.

Both producers of F-gases and pre-charged products which contain substances from Annex I and II are required to report to the Commission annually in accordance to Article 19.

Operators involved in the installation and up keeping/decommissioning, leak checking of pre-charged equipment or recovery F-gases are required to be in the possession of a certificate issued by the competent authority that they trained to the Commission’s standard. Training programmes are offered by MCAST and Jobsplus.

As an Operator, is the Certificate the only requirement to work with F-gases?

No, operators must be also in the possession of a licence only issued by Malta Competition and Consumer Affairs Authority. 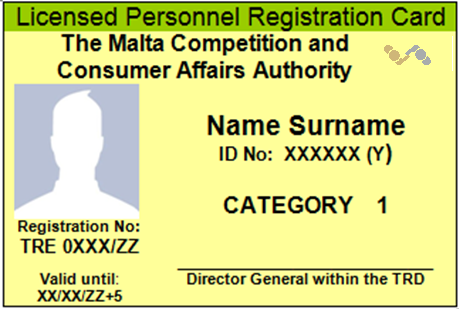 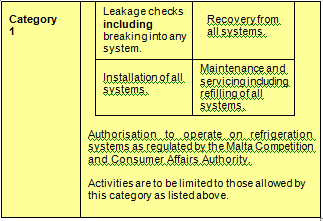 The licence is valid for 5 years after the date of issue. Depending on the training programme followed, the license is issued in several categories (categories 1-4 and HVAC). These categories impose limits to what the activities relating to F-gases and pre-charged equipment the operators are able to perform. More information on the various categories can be found in this link and in this link.

All operators need to ensure compliance with the F-gas Regulation 517/2014 in terms of record keeping, namely by having:

What are Quota Allocations and Quota Authorisation?

The Quota allocation process is started with the determination of a reference value by the Commission. The Reference value is determined every three years and it is based on the annual average of lawful placement of F-gases on the market from 2009-2012 (Under the previous Regulation (842/2006/EU)) and production, import and export of the producer. The commission distinguishes between incumbents, those who reported their production/imports in 2009-2012, and new entrants, those who have not reported in this same period. In short, higher reference values are allocated to those producers who are incumbents and have a large degree of production/export. Then, from this reference value, a quota is allocated yearly in consideration with the current quota reserve. The quota given can be only be used in the same calendar year that it was issued in (January 1 – December 31). In the case of importation of pre-charged equipment, a quota authorisation is required. Authorisation is basically an agreement between a quota holder and an undertaking where a portion of the quota is entrusted to the undertaking without effecting the quota reserve. An online process for transferring of quotas from one undertaking to another undertaking is also available. One should note that quota and quota authorisation are only needed when the total F-gas importation exceeds more than 100t of CO2 equivalents. Registration and declaration for both must be made online in the F-gas portal and HFC licensing system and apply by the deadline published by the Official journal of the European Union each year. Undertakings whom exceed their quota allocations are subjected to a quota reduction in the subsequent years and a penalty based on the amount exceeded. Further penalties based on national law may be issued as well.

What is the HFC Registry?

The HFC registry is an online registry which is used to track quotas of the undertakings, transfers of quota and also quota authorisation. A guide for proper registration can be found here.

A guide for declaration of quota and quota authorisation can be found here and here respectively. Help on quota transfers is also provided here.

What should be reported to the Commission?

More information on how to report and what information should be included is found in this link.

As an Undertaking, how will Brexit affect me?

From 31 October 2019, the United Kingdom is expected to be considered a “third country” by the European Union, unless another extension is agreed upon. For information on the effects of the withdrawal on the market is found here.